PRIME is set in a flooded world where global warming and other natural disasters have forever shifted the balance in society. It is up to a reluctant heroine to help right it. Lia Meloy is learning to swim, even though it's outlawed for her kind. Lia is a Homesteader (nicknamed a "Norm"), meaning her ancestors stayed on dry land when the floods hit, but eventually had to seek help and shelter from the Aqua Primes, who had developed better biology and technology for an oceanic world.

When Lia's family moves to Prime land, she knows she should feel lucky, but life among the privileged set isn't easy, especially at Berkmont High, where the students are constantly reminded that one wrong move could get them deported. Lia seems to be making wrong moves all the time. Training with her father to swim, for instance. Or falling for Trey Schaeffer, the son of the Property owner, whose sister Molly despises everything Norm.

But things are not always as they seem. When Lia's father passes away, Lia discovers he was part of something bigger, something mysterious, and that there is much more at stake than she previously thought. Closely guarding her father's greatest secret, Lia will have to reevaluate her worldview and make tough choices to keep her family, friends, and all of her people safe. 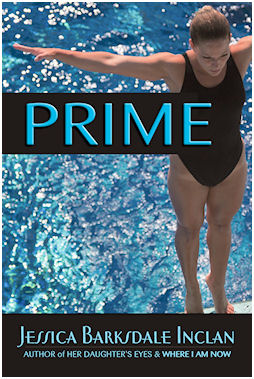 "I was absolutely stunned by how great this book is. The bleak, watery world humankind would face if the polar caps melted is an all too possible future, which Jessica Barksdale Inclan paints so vividly and realistically. As a fan of her writing, I was so pleased to find that Prime is yet another of her books with the rare quality of making me feel as if I were living in the story while reading it. I didn't expect to be so enthralled by a story with teenager for a protagonist - I'm in my 40s and have no interest in Twilight books or the like - but the characters are so real and the story is so compelling that I forgot it was a "teen" book and got lost in caring about the people that dwell within its pages. I never wanted to stop reading, and nearly missed my train stop every day on my commute until I finished it, which never, ever happens. I was on the edge of my seat at the end and truly hope that this story will continue in future books - I must know what happens next!"